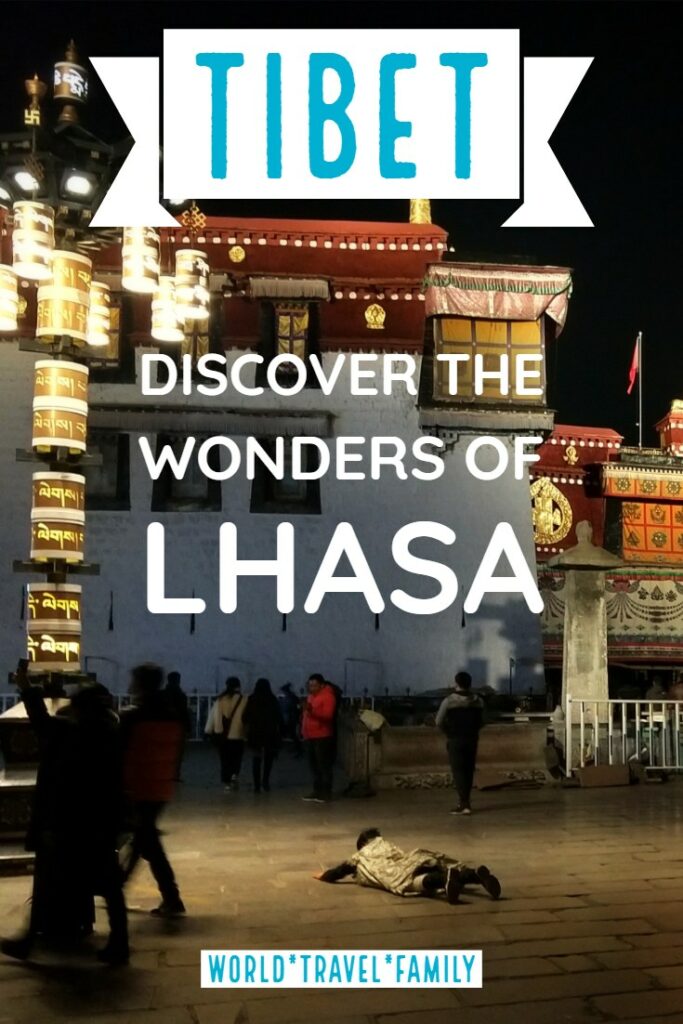 Our Lhasa tour was part of a longer 8 day tour of Tibet. We travelled overland from Kathmandu and returned by air from Lhasa airport. Lhasa itself was an incredible highlight not just of this Tibet tour, but of a lifetime of travel. I knew a lot, feared disappointment and was ready for the worst but Lhasa did not disappoint in any way, we were blown away by our two days in Lhasa and would return in a heartbeat. We hope you enjoy learning more about Lhasa, Tibet below, watch our short video, save to Pinterest and make it to Tibet yourselves one day.

From here on in, this post is written by D, my elder son. We have several other posts on our time in Tibet, just check the related content section at the end. Don’t forget to share to Pinterest. Thanks.

The places of interest we visited in Lhasa included:

We had the time to set out on foot and explore Lhasa in the evenings and even attended a major festival which I thought was incredibly interesting. Lhasa in general was almost like a hybridisation between the old and new eras of this great city, the beliefs still ran deep through the streets but there was that modernness coating the city like new paint on an old house. You can feel that Lhasa is ancient and see it here and there, but elsewhere it is cloaked.

The Palaces, Temples and Monasteries steeped in history were breathtaking and emotional sights to see. I can’t say too much of course, eyes are on you in Tibet, sometimes obviously so, but I can give you a taste of what to expect in modern Lhasa. 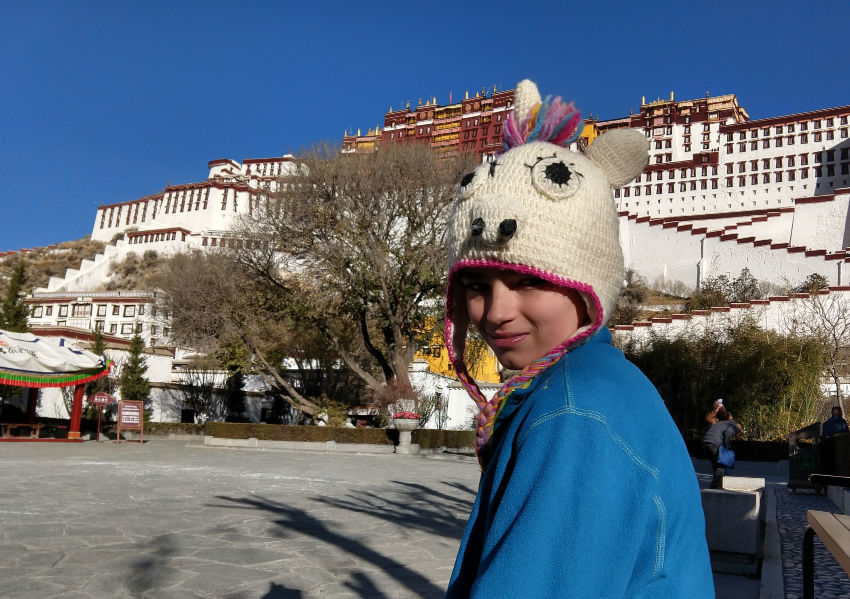 The Potala Palace was built in 1645 and is only 5 years younger than the Great Wall of China. At 3,700 meters above sea level it comes in as the highest palace on the planet and is a UNESCO World Heritage site. The Palace itself is split into two segments, the White Palace which housed the Tibetan government and the chambers of His Holiness the Dalai Lama during the winter. The Red Palace which holds the chapels and the mausoleums of the previous Dalai Lamas. When I went there I saw that it was seen as more than just a building but rather a monument to a people’s beliefs embedded within every shrine and painting.

Norbulingka or The Summer Palace was the home of His Holiness the Dalai Lama and the governments of Tibet during the summer. The Palace consists of a large park (360,00 square meters) and the Palace itself . The Summer Palace is also a UNESCO World Heritage site.. This is the place that His Holiness Departed from in 1959. Inside the palace there is a painting of the 14th Dalai Lama as a young man on the plaster of a bedroom wall and it’s the only depiction of him you’re likely to see in Tibet. The young Dalai Lama’s rooms were painted with Tibetan history, he learned from his tutors and the murals on these walls. They are still intact but no photography is allowed inside the Potala Palace, Summer Palace and most monasteries we visited. 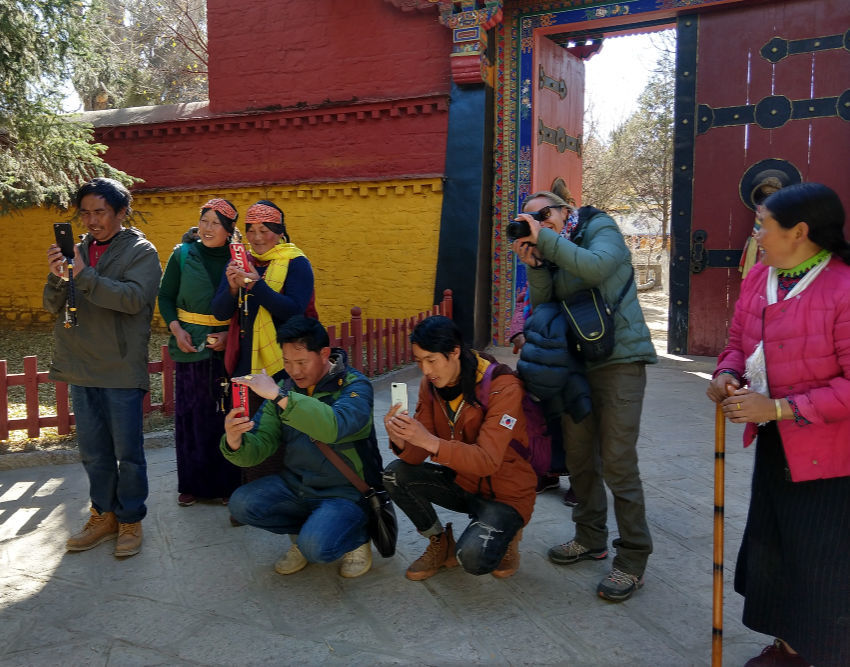 Everywhere we went Tibetan people were interested and pleased to see us, we ended up in a lot of photos. Pilgrims had come from every corner of Tibet to see Lhasa and there was fascinating diversity in their costumes, hairstyles and jewellery. The two photos above were taken in the gardens of the Summer Palace.

Jokhang Temple is a temple located in the center of Lhasa and is encircled by Bakhor Street and square. It is the holiest place in Tibet for Buddhists and its construction started in the 7th century with enlargements over the next millennium. The monastery was built to house important Buddhist statues and scripts that were bought from Nepal and China as parts of the kings’ dowries. The monastery is a UNESCO World heritage site.

When I visited it I thought it was one of the most beautiful places on the planet. you could feel the history oozing from the bones of the age-old house of belief.

We moved through The Jokhang as one with the stream of pilgrims, taking our turn to lay eyes on The Protector and receive blessing from the monks.

The Barkhor is a street that has surrounded Jokhang temple since its founding. Since its inception, Buddhist pilgrims would walk clockwise or prostrate themselves in a kora around the Barkhor, holding their prayer wheels and chanting. Once again it’s the sheer belief of the people that brings this place to life. Now, the street houses many shops and stalls where you can buy trinkets, jewelry, Tibetan clothing, some for international tourists, some for local visitors. The street marks the edge of a whirlpool of spiritual life that is sucked into the Jokhang.

We already posted a full blog post on Sera Monastery and the monk’s debate. There’s no need to repeat myself so I’ll send you to that post, with video, of the debating and a second ceremony we were lucky enough to catch at Sera

Where Did We Stay in Lhasa

The hotel we stayed at in Lhasa was characteful to say the least. The hotel was situated near the Great Mosque of Lhasa in a street packed with Muslim traders. We were a short walk from the Barkhor, there were a couple of police check points around the city but they were aimed at locals, not so much western tourists. The hotel rooms were not nice at this hotel, they where filthy and I don’t want to know what the source of the mold was. Many of our group complained about this hotel.

Unlike the hotel in Lhasa the bus was incredibly modern and even the roads themselves where nice and smooth. Driving conditions are good in modern Chinese Tibet 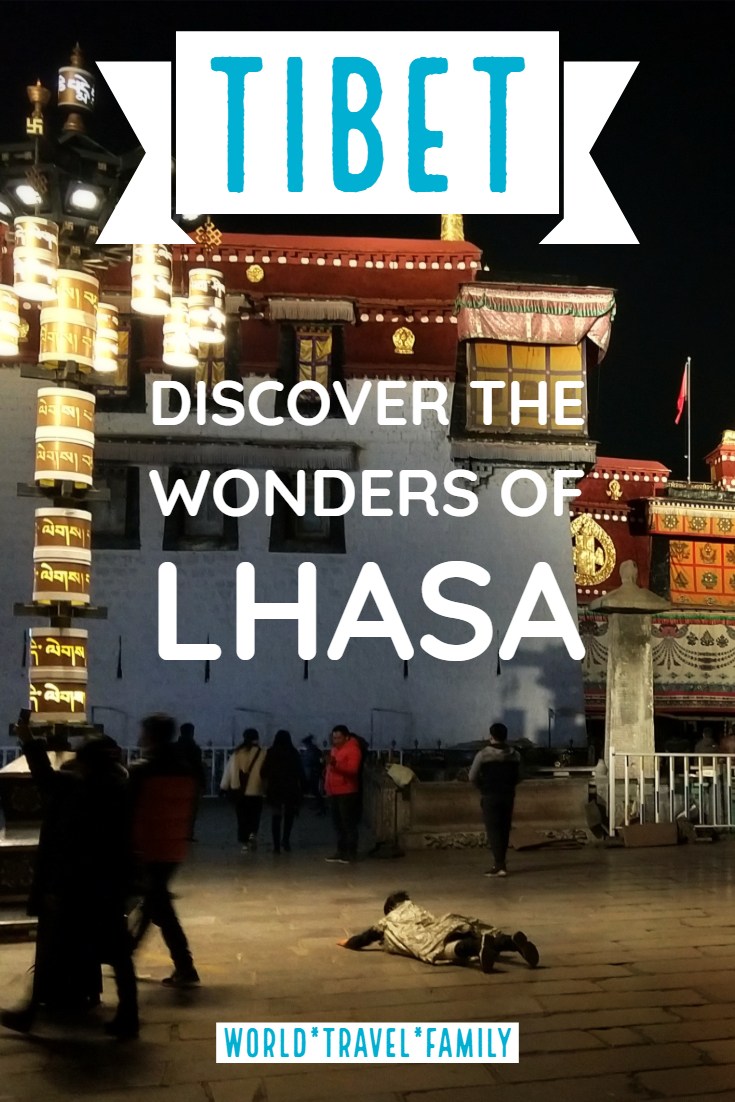 A Lhasa Tour of a Lifetime

I found Lhasa and Tibet as a whole to be an amazing and beautiful trip. It wasn’t my favorite, but without a doubt in my mind it will be the one I will remember forever. It’s not the kind of place you go to on a dainty little holiday but it will be my most emotional travel experience, the place has a depth to it unlike any other country I have ever visited. I don’t think that anything is going to trump the feeling of being submerged so deeply in culture, I wouldn’t give up that memory for anything. That’s my opinion and everyone should be able to formulate their own opinions through experience.

A final word from me, Mum, my son wrote all of the above and all opinions are his own. I’m actually amazed how deeply he was touched by Tibet and this work of his just confirms what a great idea it was to travel the world with our kids. I’d like to say that Tibet was gut wrenching, beautiful, harsh and raw. It was a dream come true for me but hard on my younger son, he was just 11 when we visited. Do I recommend a tour of Lhasa ? Yes, but be ready for what you will find, expect some hardships and know how to deal with altitude and acclimatisation in Tibet.