Updated 12/07/2019 By Alyson Long. Any post on this site may contain affiliate links. If you use them, they cost you nothing extra. We make a small commission. 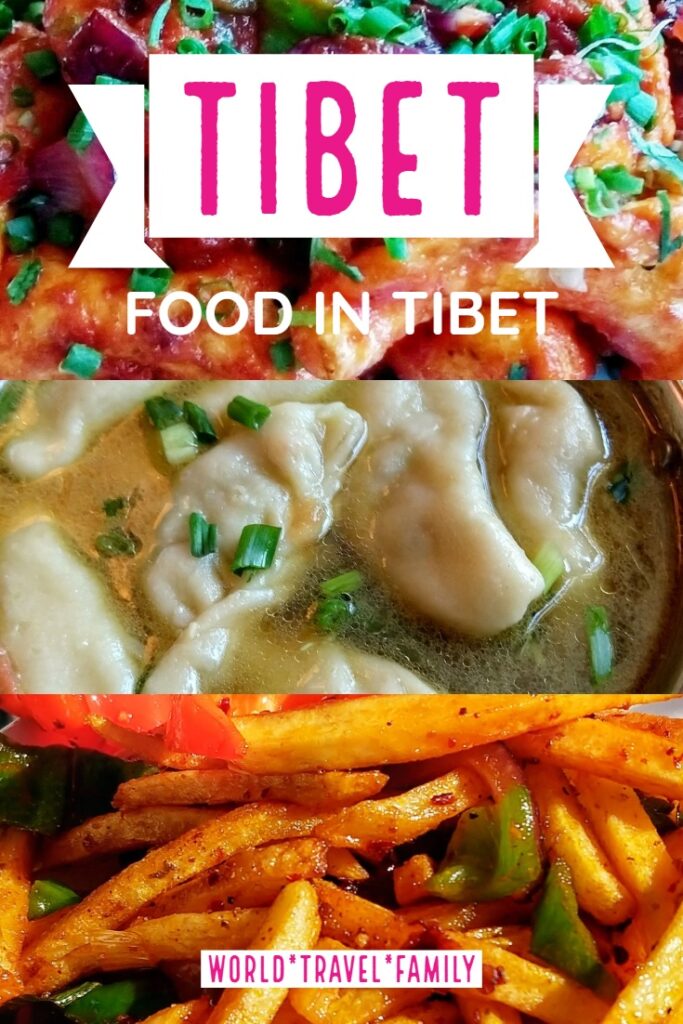 It was great to get the chance to try Tibetan dishes, in Tibet. We’s skirted around the edges of Tibetan culture in the Sherpa villages of the Everest region and dined in Tibetan restaurants in Kathmandu and Pokhara, often run by Tibetan refugees, but what of food in Tibet ? How would that be. We had an amazing chance to find out during our Tibet tour. Some Tibetan food was amazing, truly delicious, much of it, less so, but on a short tour or trip to a new destination it’s always difficult to know where to eat. A look at traditional Tibetan dishes, Tibetan food and what we ate in Tibet because not all of it was Tibetan. 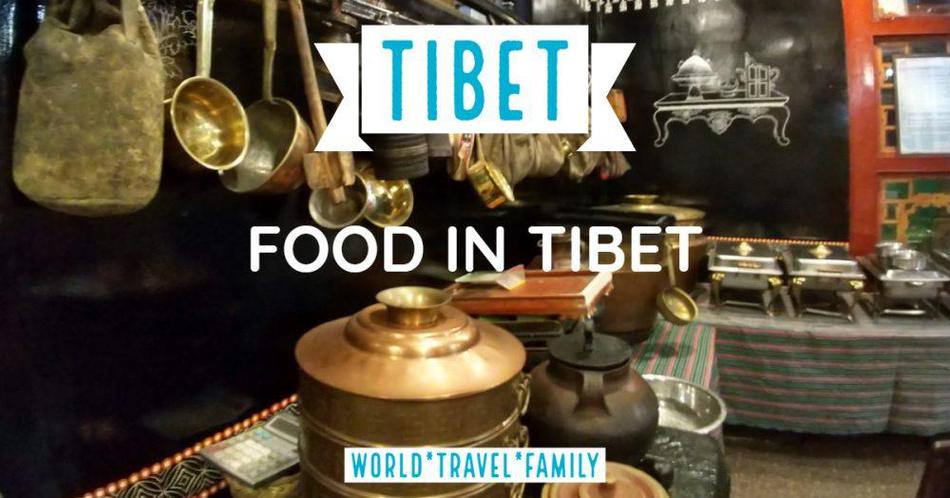 There are many influences in Tibet, Chinese, Nepali, Muslim, Indian, and restaurants exist at tourist and local levels. In Lhasa we dined well. On the road in small towns food was more limited. One stand out meal of noodle soup and flower tea gave us no clue as to what we’d been served. A friendly Muslim family simply served us, it was good, it contained meat, we have no idea what it was. Food in Tibet was varied and interesting, some of it very similar to what we’d eaten in Nepal.

The staple crop of Tibet is barley and this can be ground into tsampa or used in making noodles or momo. The menu is pretty meat heavy and veg light, expect yak, goat and mutton. The Tibetans also grow mustard seed although I didn’t notice it in any of the dishes we consumed. 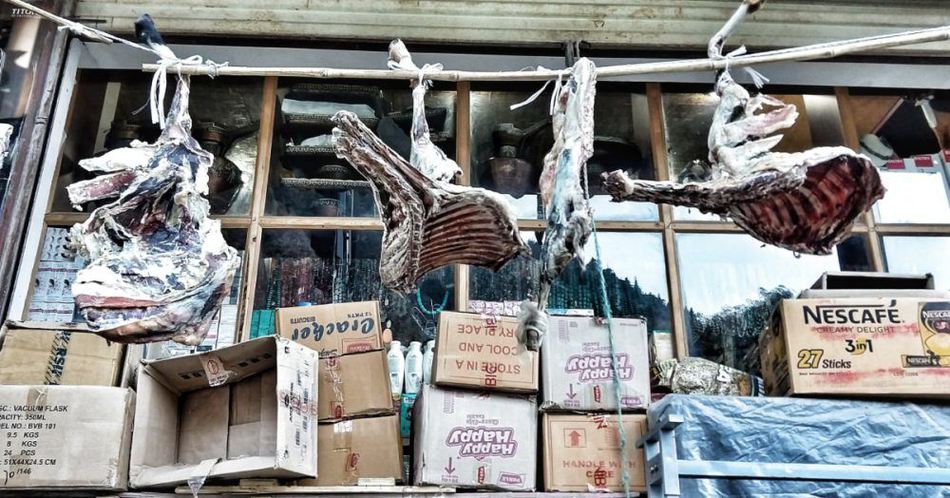 All the photos and experiences we collected of eating in Tibet, including restaurant names where possible, are below. I’m not going to pretend to be any sort of expert on Tibetan food, but I know more now than I did before we visited.

The internet will tell you that the following are some of the classic dishes of Tibet. Food in Tibet is actually more diverse than this and we were able to order Nepali food, Indian food and Chinese meals alongside Tibetan. Dishes we’ve always considered Nepali such as thukpa or momos are generally listed as Tibetan too. So, if you’re thinking Tibetan, start thinking about these foods and drinks.

I should mention here that a yak is usually a male hairy cow. Obviously the yak does not give milk or butter, that’s down to the female, the dri or nak so yak butter and yak milk is considered incorrectly named. Most people know it as yak butter so we’ll stick with it for now.

Best Blog Read Now!   Hoi An Markets : Central Market, Night Market and Others in Hoi An

Being Vegetarian or Vegan in Tibet

Good luck with that! I found plenty of dahl and it was cheap with a chappati. We even found dahl baht, but unexpected animal produce was always popping up where I least expected them and there was a language barrier. The vegetarian momo soup above came in chicken stock for instance. I’m pretty easy-going but if you’re strictly vegan you may have issues. 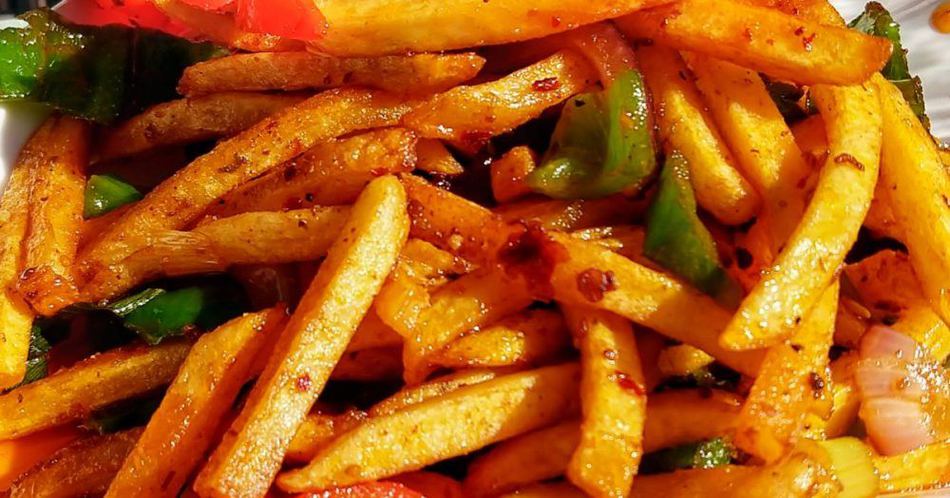 Chilli chips or chip chilli is so so good !  If you can find it, try it. I’ve read that it’s of Chinese origin so no surprises that we ate it in Tibet. We’ve also seen it in Kathmandu, Chitwan and Goa. It’s chips, fried with a few bits of veg and chillies. If your chef uses ketchup instead of a home-made tomato or chilli sauce it’s very disappointing, but made from scratch it’s yum. This is one to make at home, great for vegetarians and vegans. We tend to share a plate of chili chips along with some pakodas or pakoras or even have chilli chips alongside dahl. Try it ! This plate was at a restaurant outside the magnificent Sera monastery. 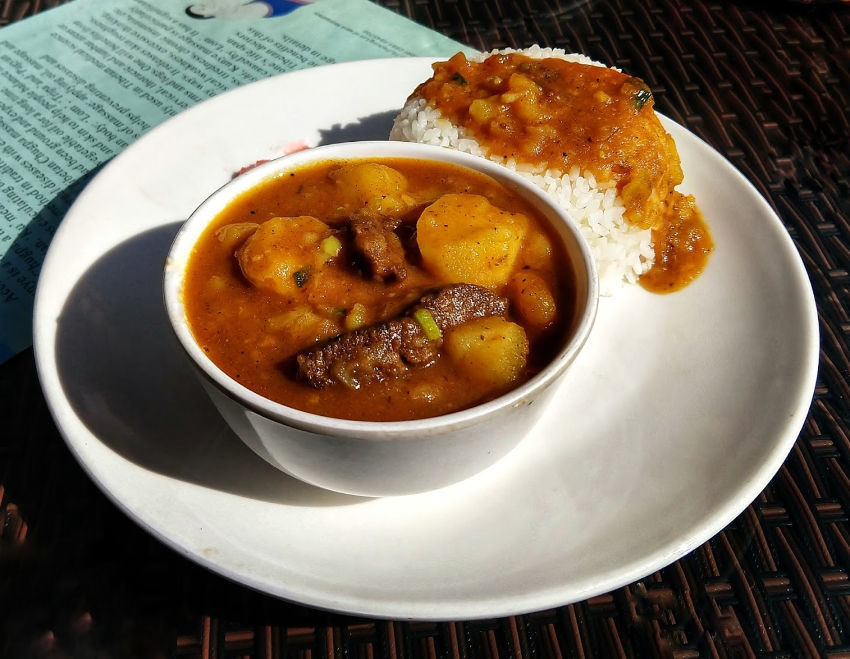 This was, I believe, yak and potato stew. It seemed weird to have these meaty stews served with gravy and rice. But when in Tibet…  It was nothing to write home about but Chef had to give it a try. Yak is good, very good, but this dish was too bland.

Notice how Tibetan bread  has this pattern of holes, this Tibetan bread in Lhasa was strikingly similar to Tibetan bread made for us by the Sherpa people in Nepal. The Sherpas originally came from Tibet.

Restaurants in Lhasa We Can Recommend

We loved Lhasa, D is writing a post on our Lhasa experiences and it will be published within days. A lunch and 2 dinners very near to Jokhang and just off the Barkhor were some of the best food we had in Tibet. Our hotel in Lhasa was , unfortunately, dire. Nothing to report there other than eggs and bread, as we saw most mornings on our Tibet tour.

The two restaurants we can recommend here are The Lhasa Kitchen, and, almost opposite, Snowlands Restaurant. The latter was more international but had the kids’ favourite yak sizzlers and dahl for Mum.

The only western chain food we saw in Tibet was Burger King. There was one in Lhasa and in the second town we stopped in. Chef and I sneaked out to this one by cycle rickshaw to get coffee. Coffee was somewhat lacking throughout Tibet but there was plenty of green tea. We sometimes had kettles in our rooms and, being experienced travellers and addicts, had some instant coffee with us. If you can’t dig instant take a look at our travel coffee makers post.

I believe there is KFC in Tibet but we didn’t see it, it’s not somewhere I’d ever go as last time I checked they don’t have coffee. We have a joke in our family, we go to KFC once every 6 years , for mashed potato cravings. There are plenty of pizza places in Lhasa. If you want a good read and are interested in Tibetan life, try this book, The Hotel On The Roof of The World. I read it years ago and it’s hugely entertaining, about the struggles of a western hotel manager going to work at a hotel chain in Lhasa. It’s real, raw and funny. Back then I never dreamed I’d get to Tibet, nor dreamed I would earn a living as a travel writer. 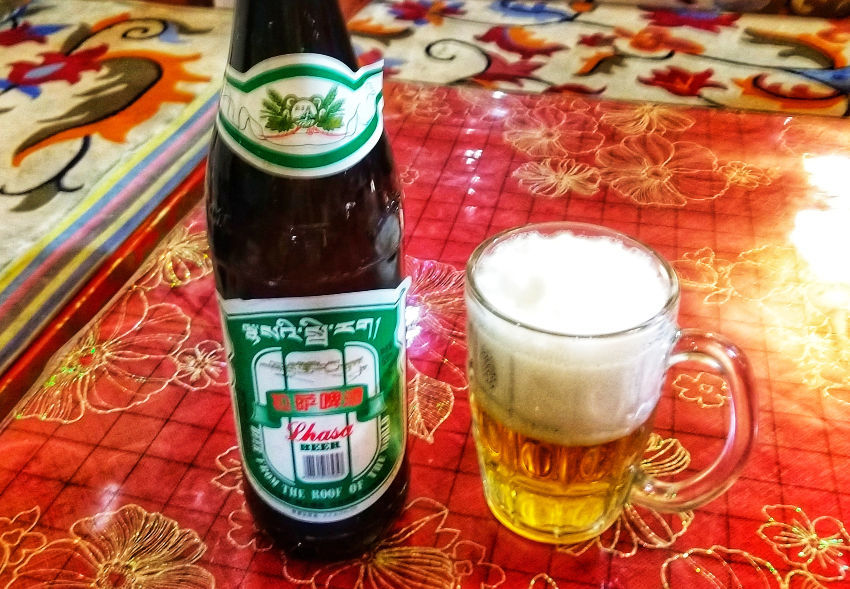 Lhasa beer is rather good. Just don’t let your wait staff pour it for you. Traditional Tibetan alcoholic beverages weren’t on offer for us but chaang is the usual home-made Tibetan beer as it is in quite a few other countries. Share to Pinterest, hover and a button should appear in the middle of the photo below.

So eating in Tibet was interesting and Tibetan food was exciting to try. I wish we’d had more time and more eating opportunities because I know we missed out on a lot. As this tour was hotel-based every breakfast was basically eggs and bread, which was rather disappointing and tough on my wheat-free son. As somebody aspiring to be vegan but flexible in the face of remote locales and a realist, I’ll take the eggs. Unfortunately our eggs came mixed with bacon one morning, which I actually didn’t notice until the kids spotted the tiny flecks. So vegans beware. I did manage to procure some home-made chili sauce to go with my eggs at the nicest of our hotels but otherwise it was all very dull. One hotel gave us French fries, broccoli and Chinese pork buns for a breakfast of shocking quality. Surprisingly that hotel was Nepali run. As with any country it takes time to find the best food and dishes and time wasn’t something we had. Would I like to go back and try more Tibetan food – you bet!

Why Lockdown Made Us Stop Homeschooling