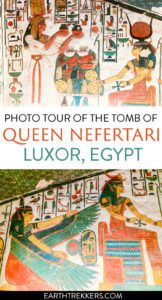 The tomb of Queen Nefertari, which is located in the Valley of the Queens on the west bank of Luxor, is one of the most spectacular tombs that you can visit in Egypt.

This tomb has a big “wow” factor. The level of detail is amazing and the colors are more vibrant than what we saw in any of the other tombs, temples, and pyramids in Egypt. If you want to get an idea of what the tombs looked like 3,000 years ago, put the tomb of Queen Nefertari on your list.

We think so. The tomb of Queen Nefertari is extraordinarily beautiful and we all wandered through the tomb in amazement.

You can see for yourself in our photo tour below.

But first, here is a little history about Queen Nefertari and her tomb.

Interesting Facts about Queen Nefertari and Her Tomb

Nefertari was the first queen and the most beloved wife of Ramesses II (also known as Ramesses the Great). Not only does she have one of the most exquisite tombs in the Valley of the Kings and Queens, but Ramesses II also honored her by building her a temple, the Small Temple at Abu Simbel.

Her full name, Nefertari Merytmut, means “most beautiful, beloved of the goddess Mut.” 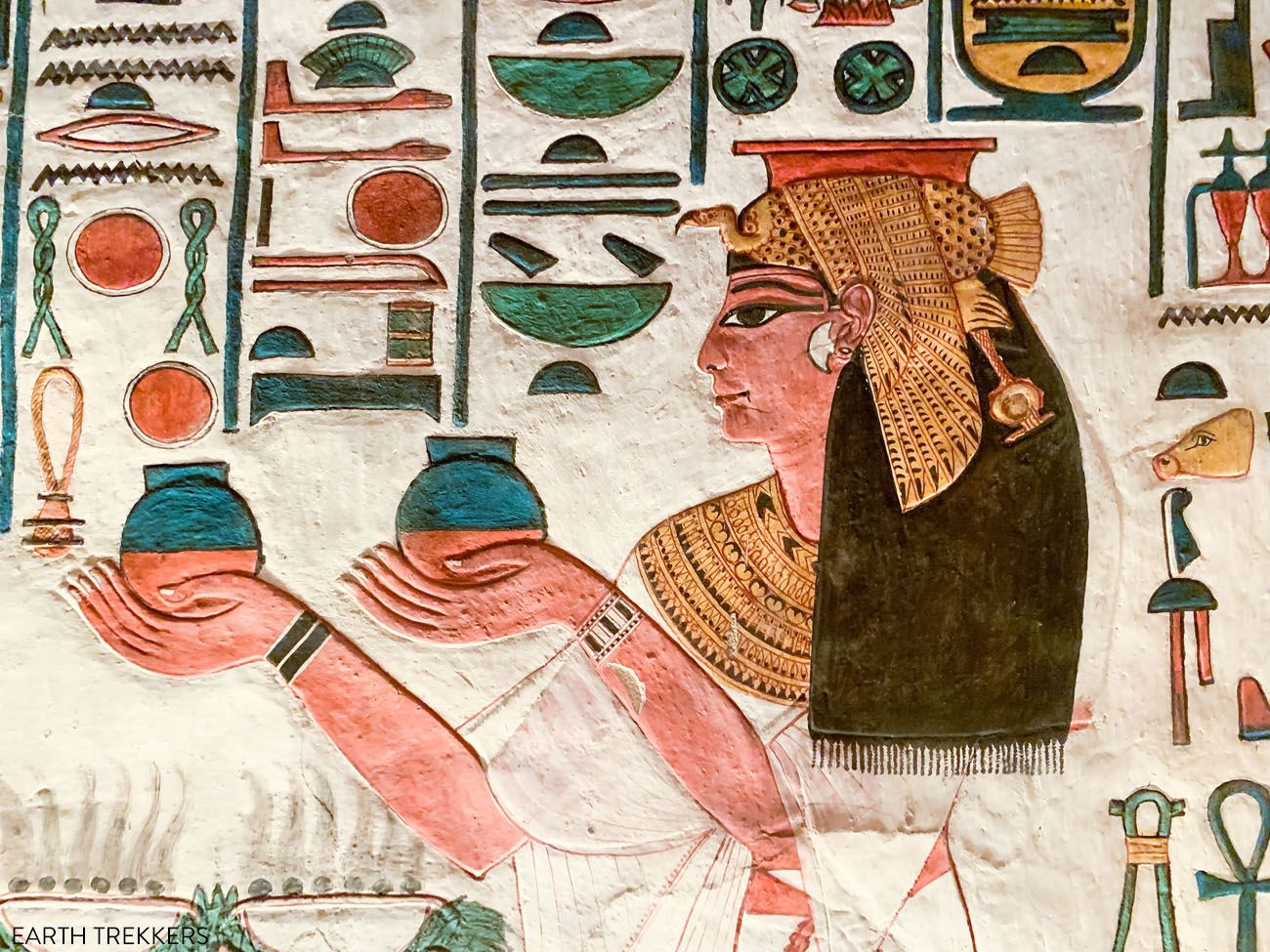 Her sarcophagus once sat in the middle of the chamber, but tomb raiders stole all of the buried treasure, along with the sarcophagus and Queen Nefertari’s mummy. All that was found, when the tomb was rediscovered in 1904, were the mummified knees of Nefertari. These are now in the Egyptian Museum.

On the walls of the tomb are brilliantly colored pictures of Nefertari. These show her position in the eyes of her husband and how beloved she was. There are also numerous chapters of the Book of the Dead, which are supposed to guide Nefertari on how to transform into a bird in the afterlife.

Since its discovery in 1904, the tomb has been opened and closed to the public numerous times. The tomb of Queen Nefertari underwent restoration work 30 years ago, to restore the paintings from deterioration from water damage, salt formation, and bacterial growth.

Now, the number of visitors is limited, in order to prevent further damage from traffic and the humidity of visitors’ breath. That is the reasoning behind the big ticket price.

Tomb of Queen Nefertari in Photos

Photo rules change frequently. During our visit in December 2019, cellphone photography was allowed, without having to pay for a camera ticket. Photography with cameras (including DSLR’s without a flash), Go Pros, and point-and-shoot cameras were not allowed.

All of the photos in this post were taken with a cellphone, without a flash. The lights in tomb create a yellow haze in the photos. After taking the photos, I adjusted the white balance but I did not increase the saturation of the colors. These paintings really are this vivid. 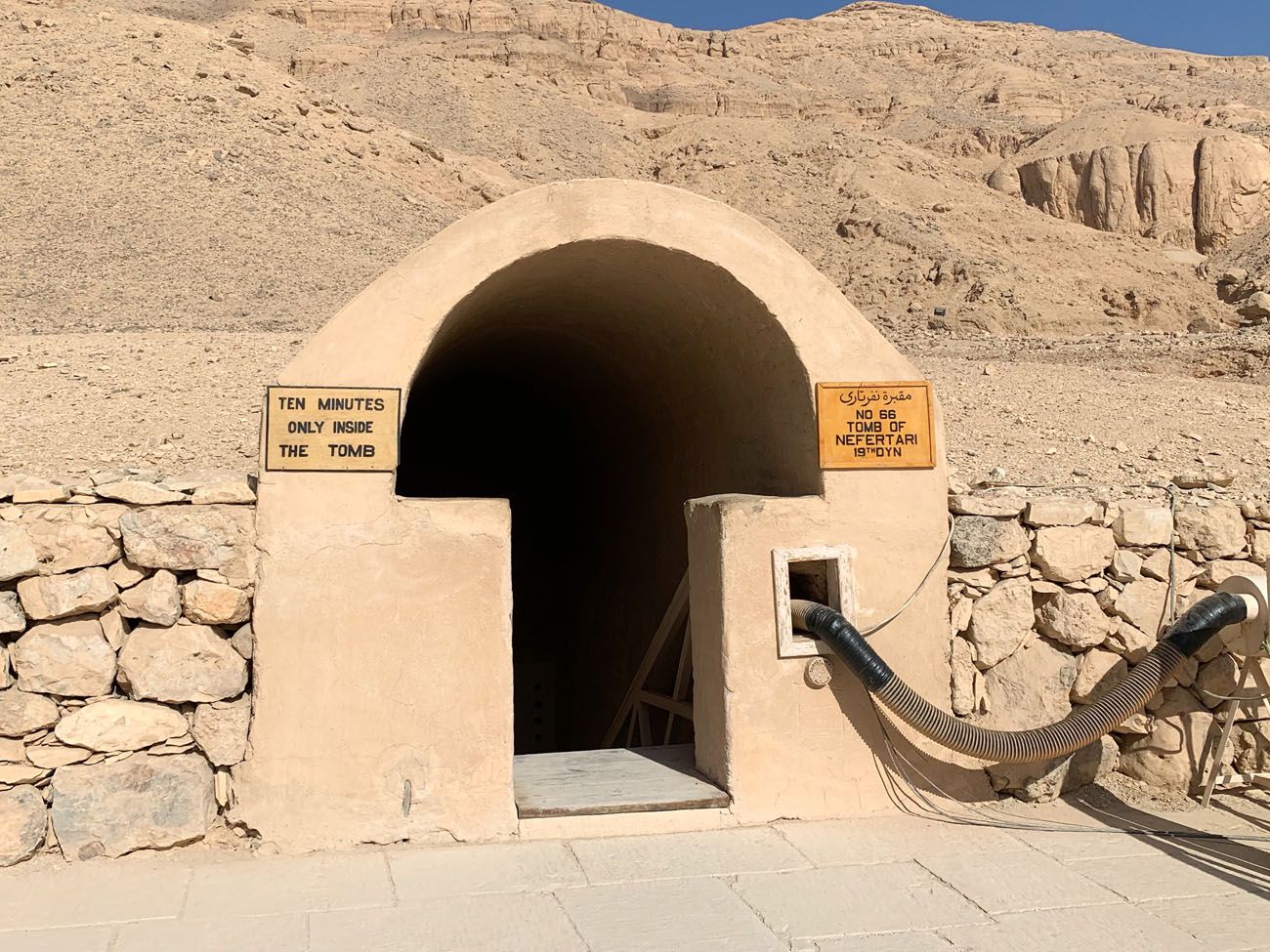 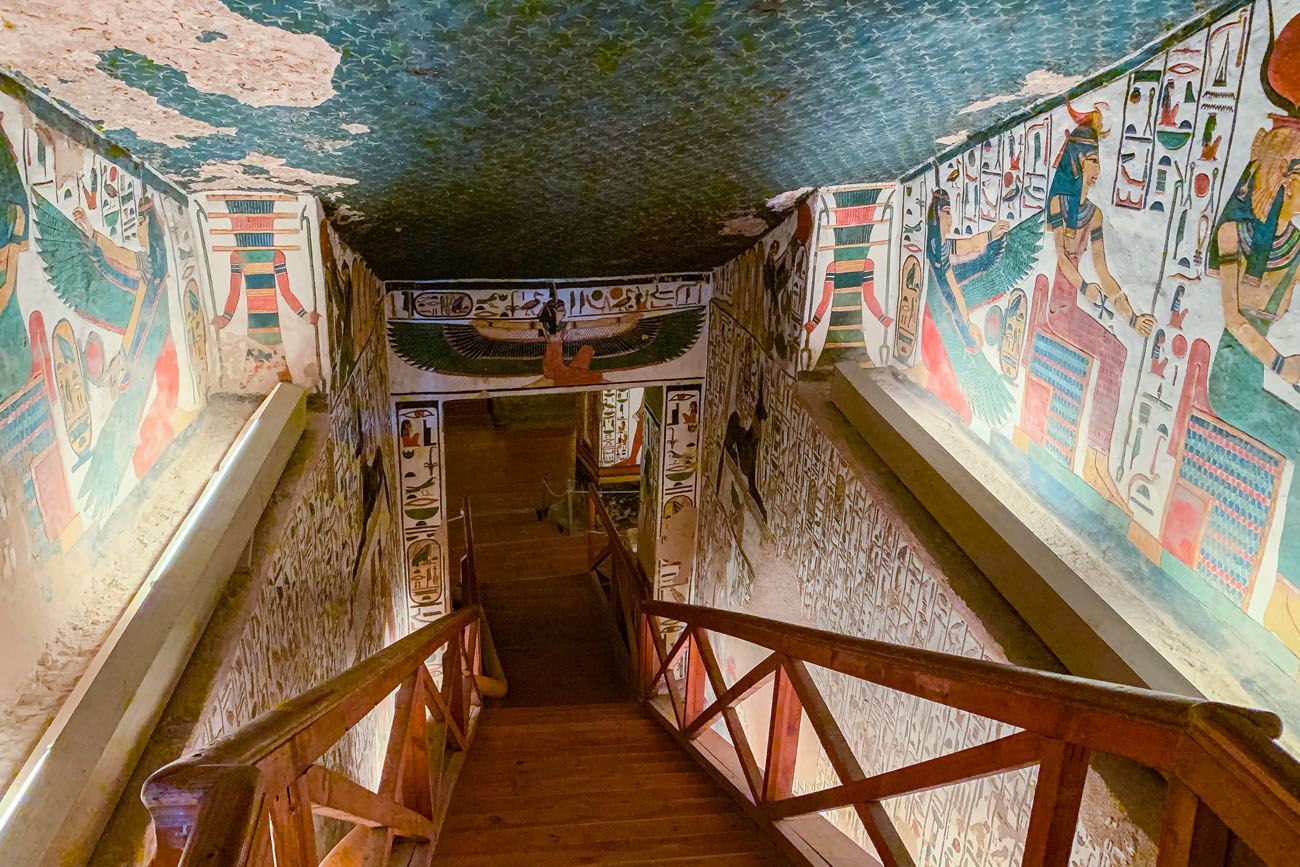 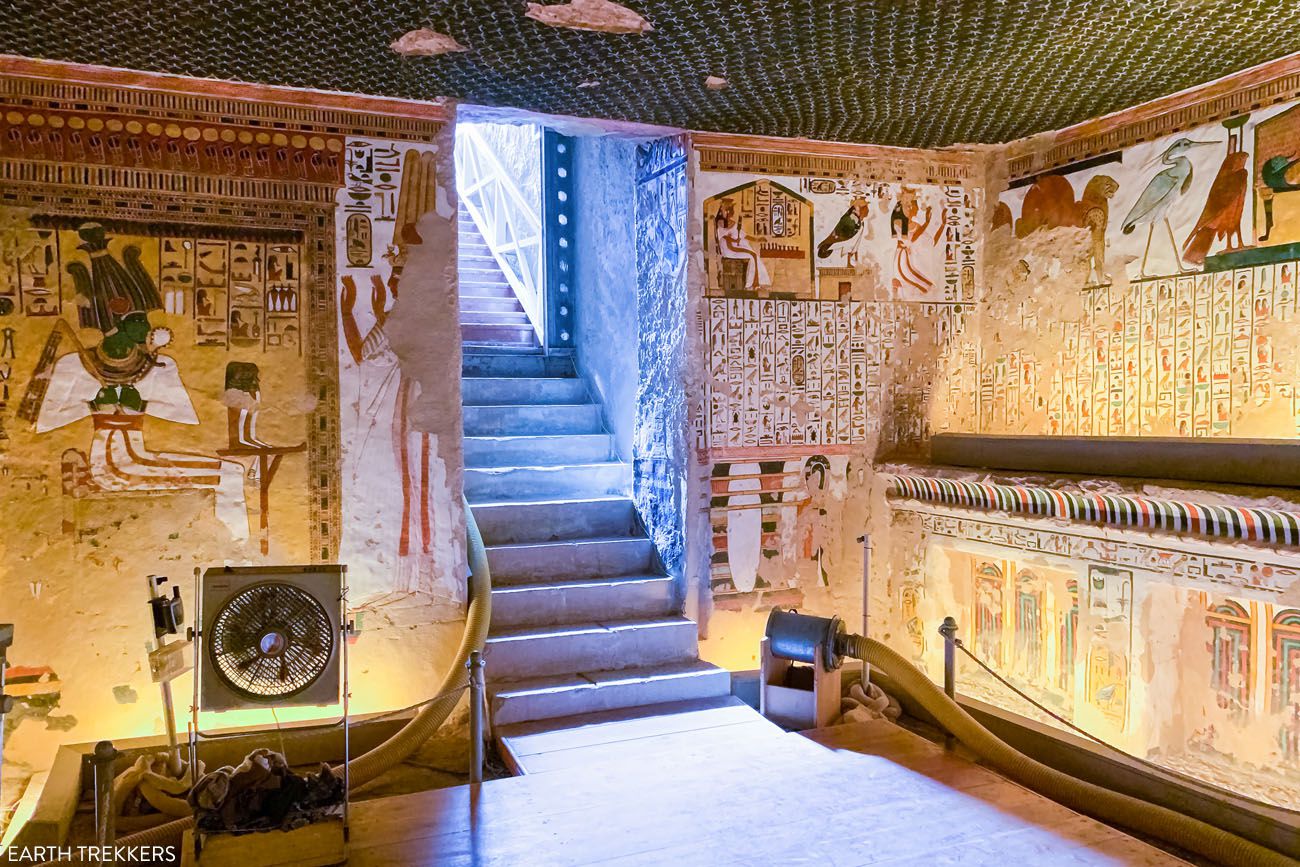 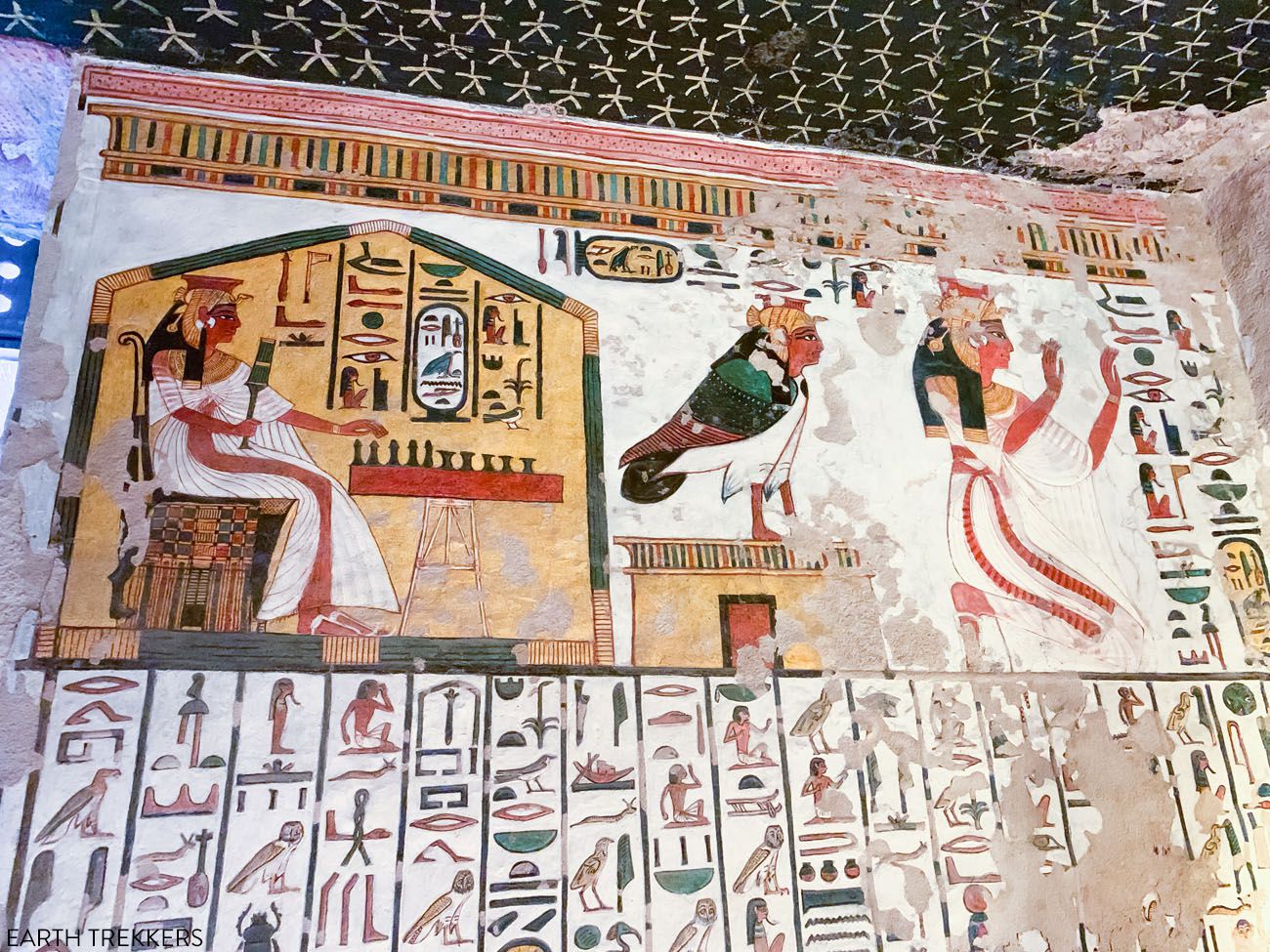 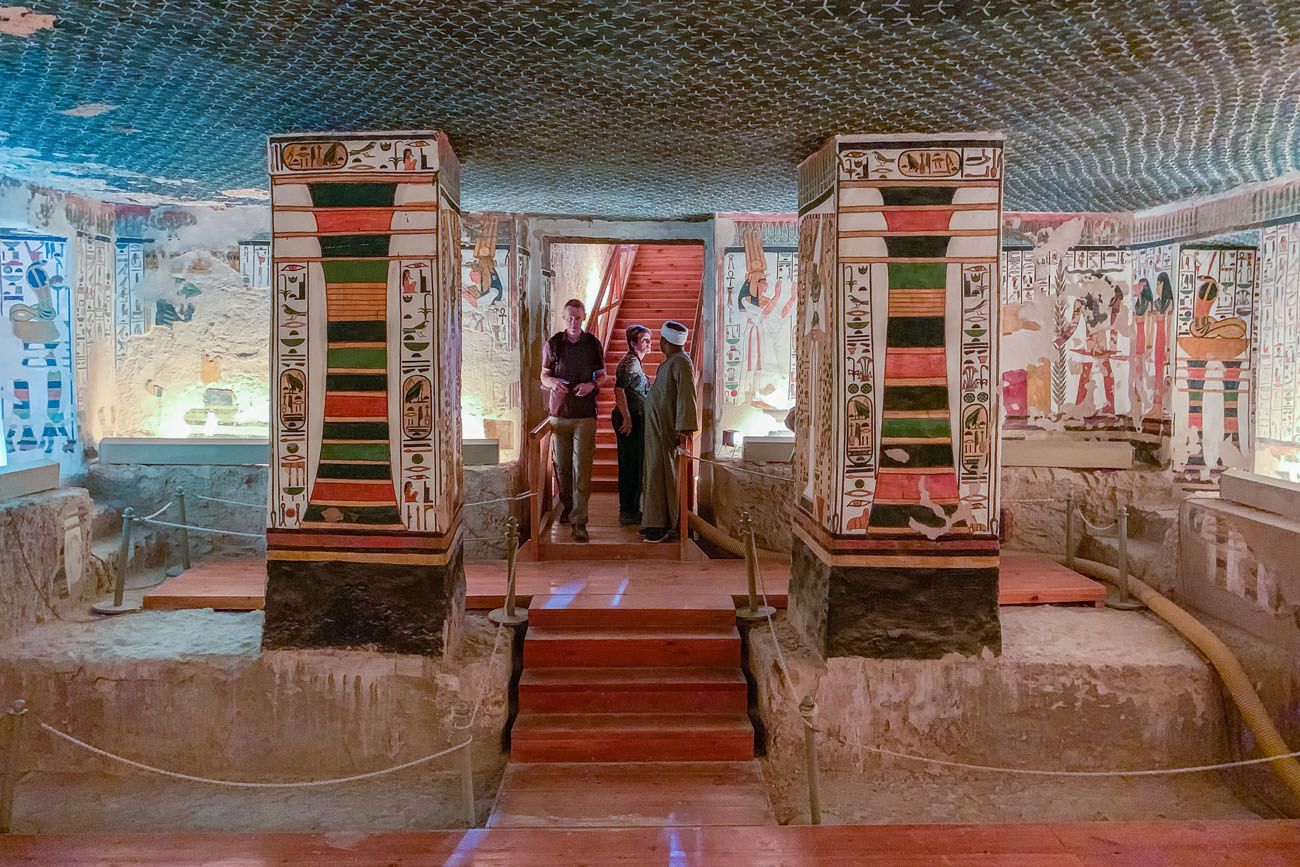 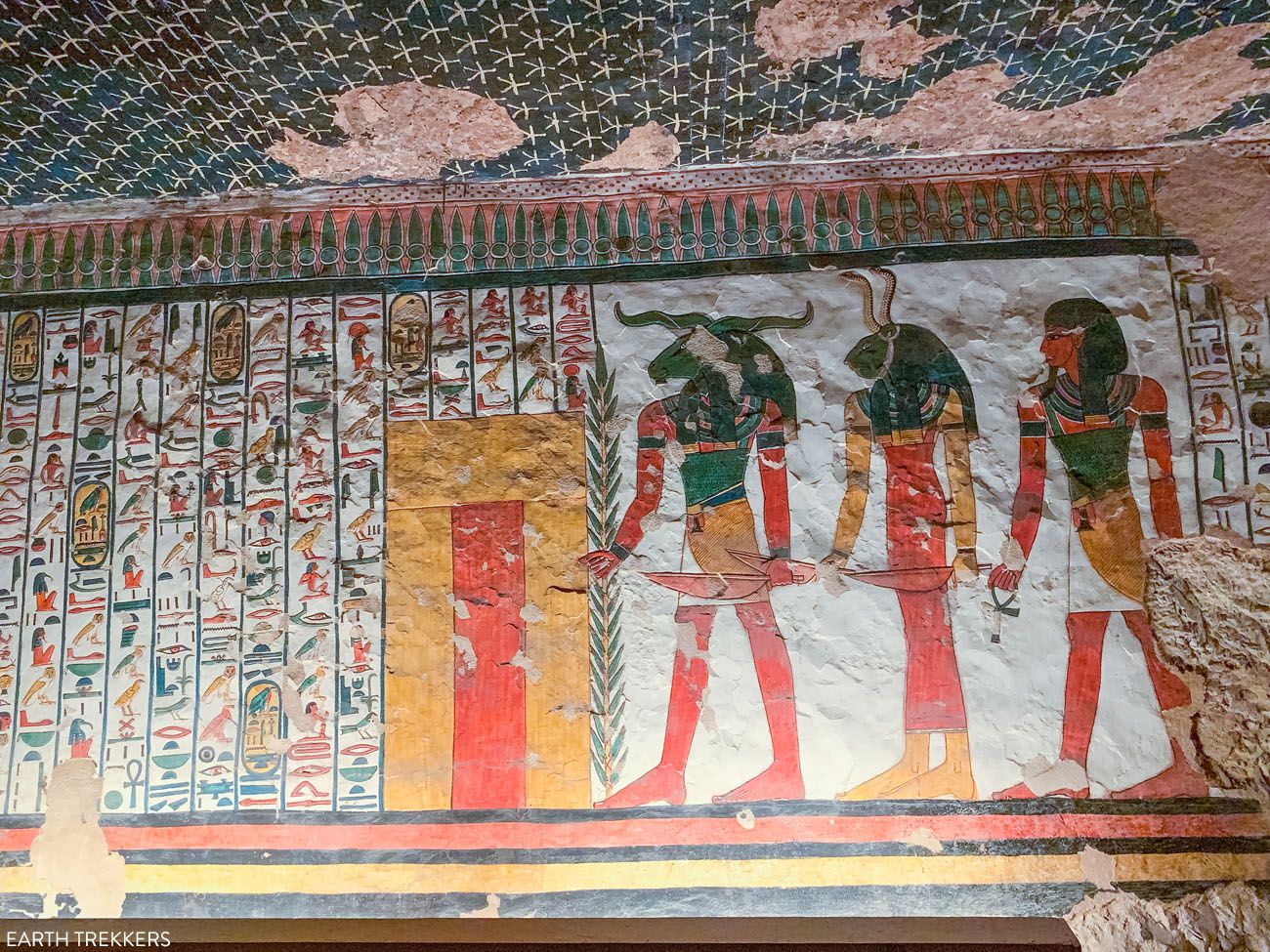 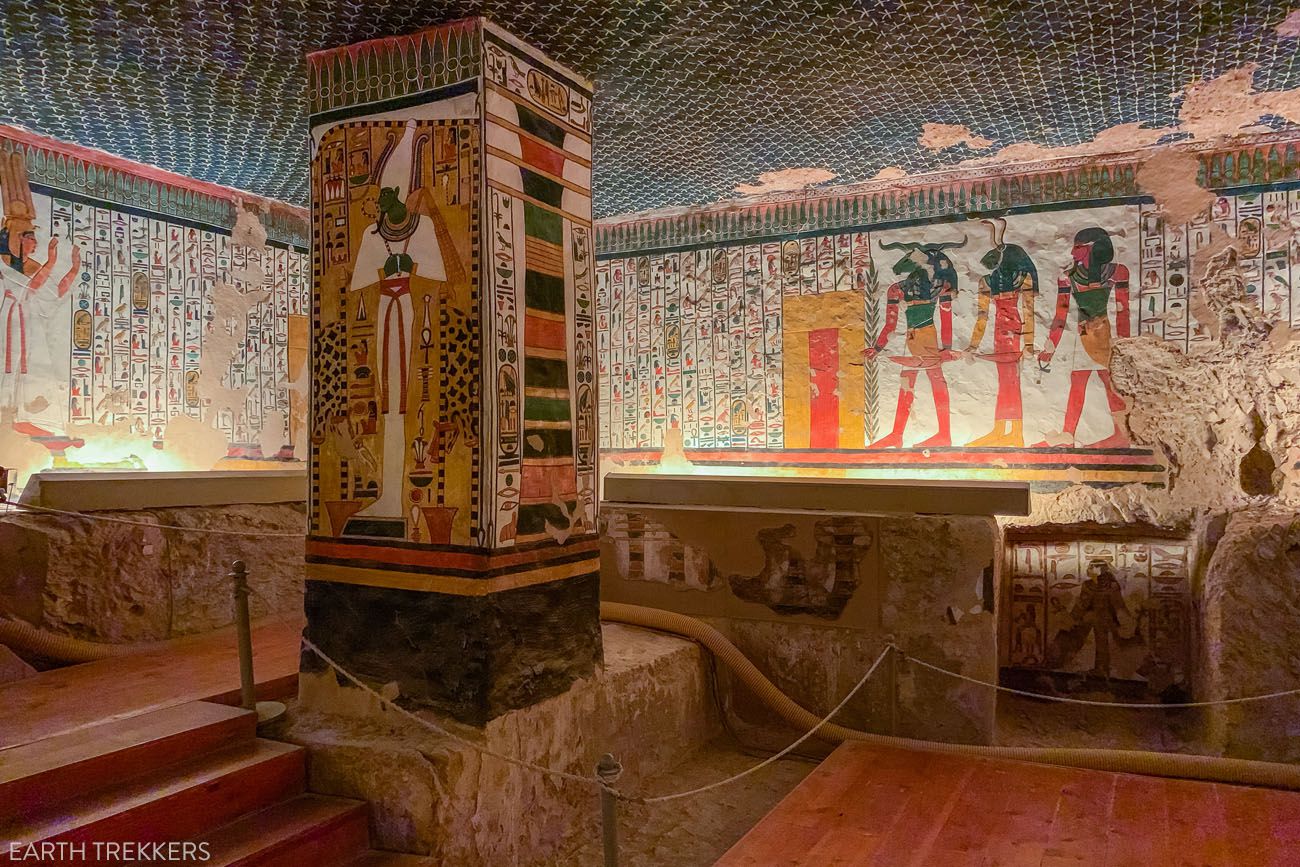 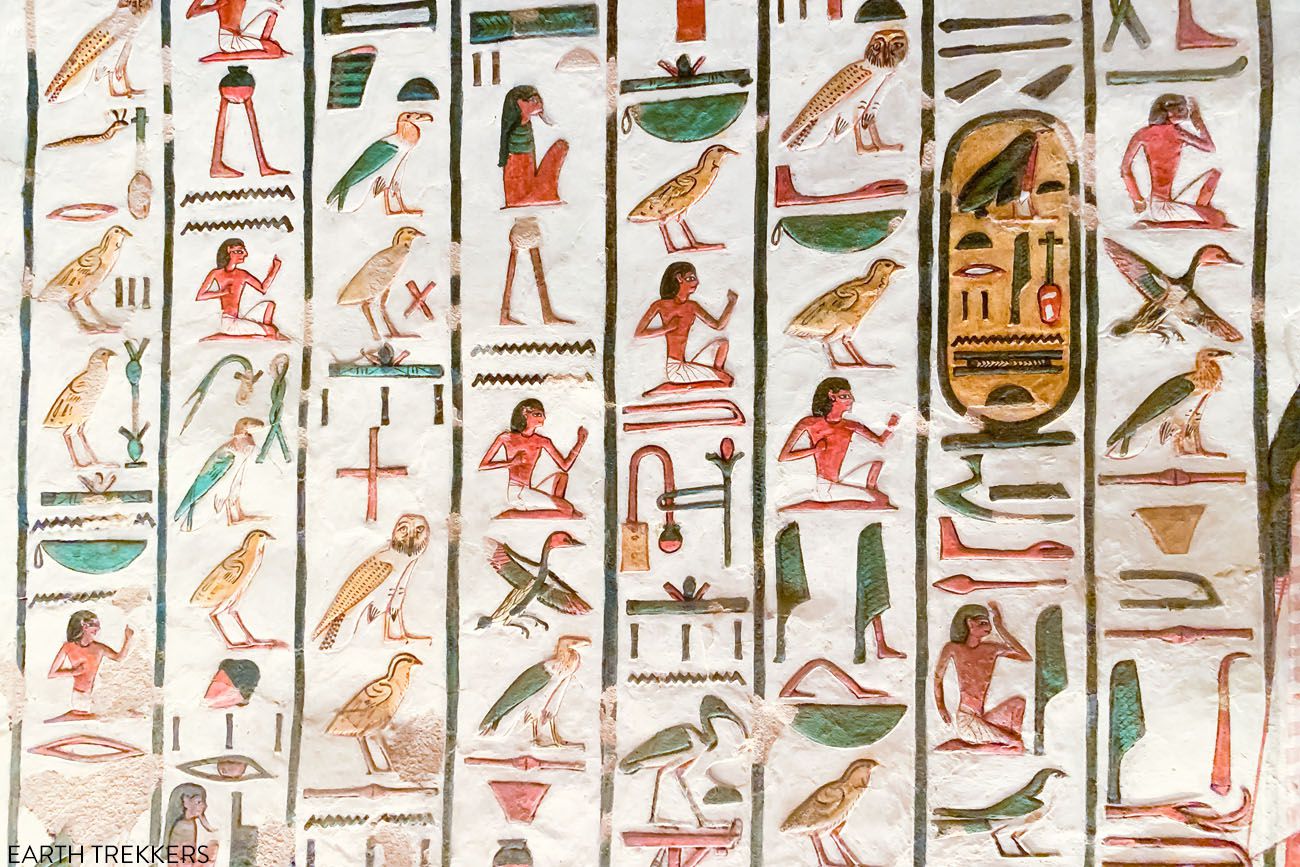 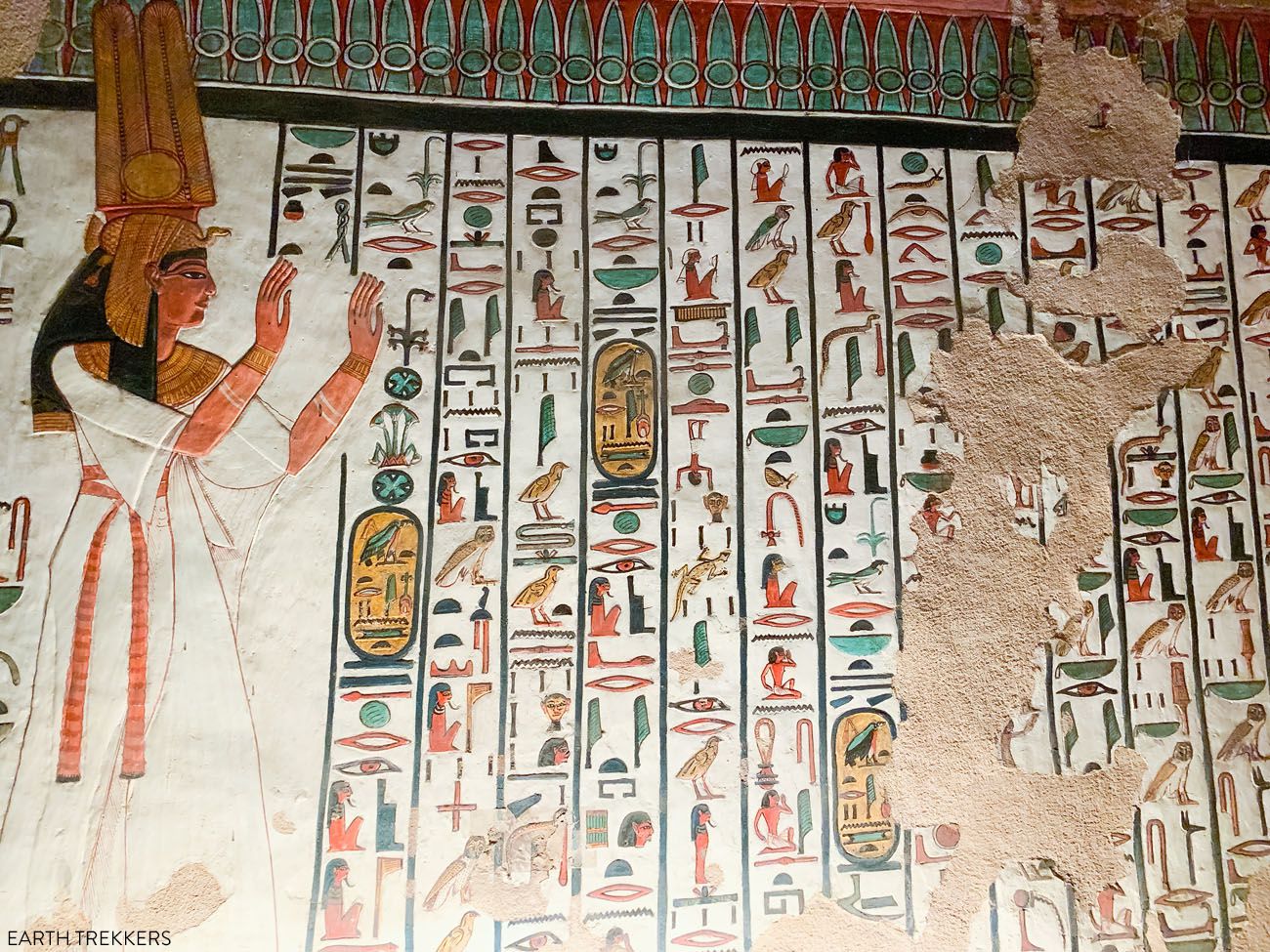 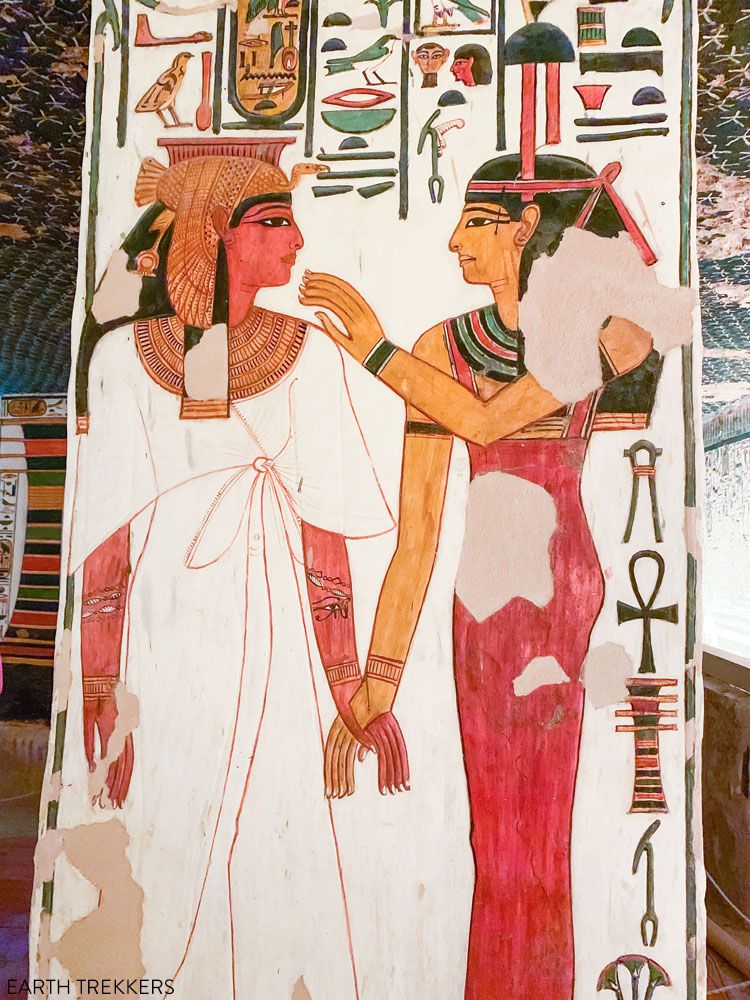 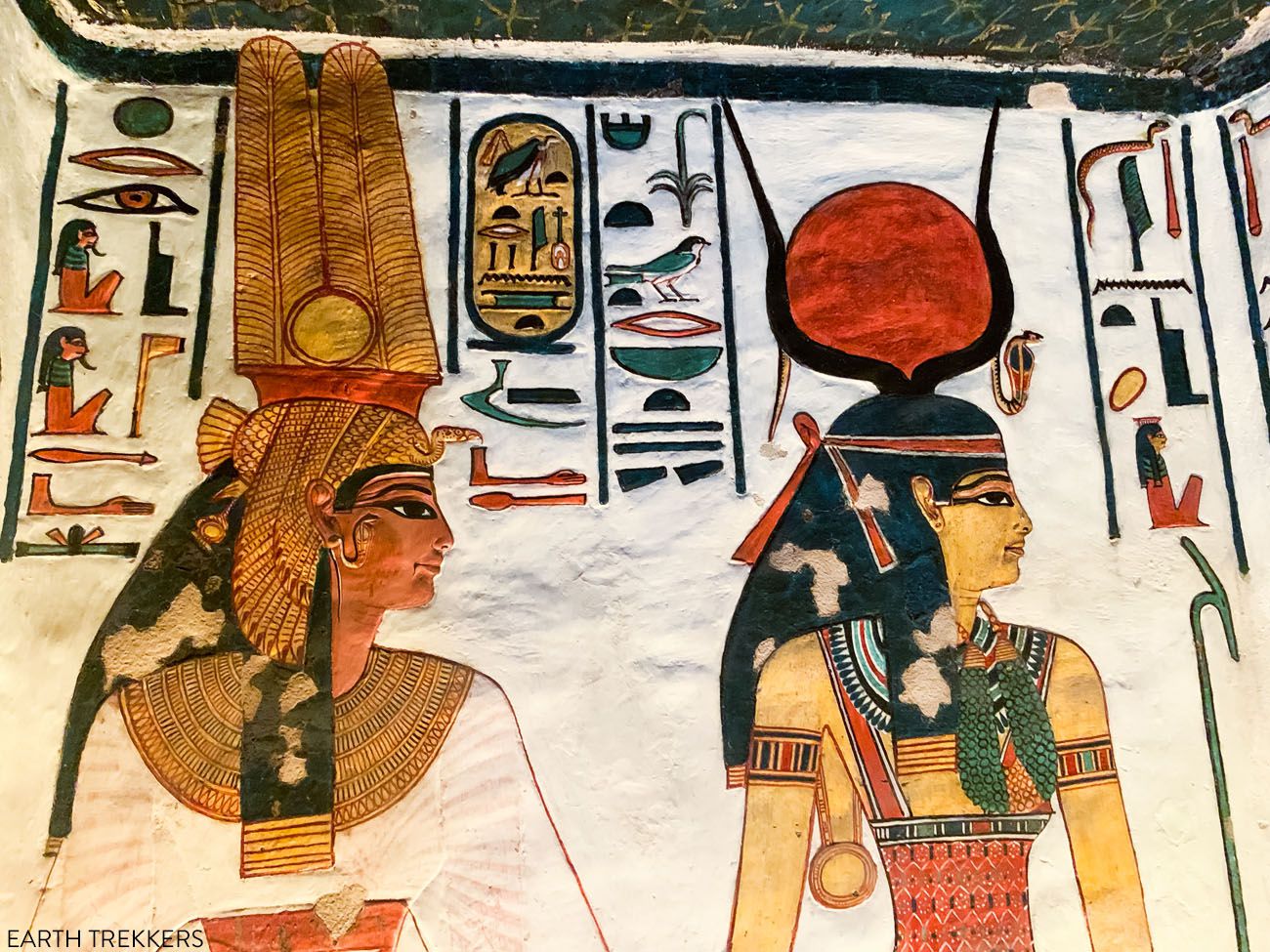 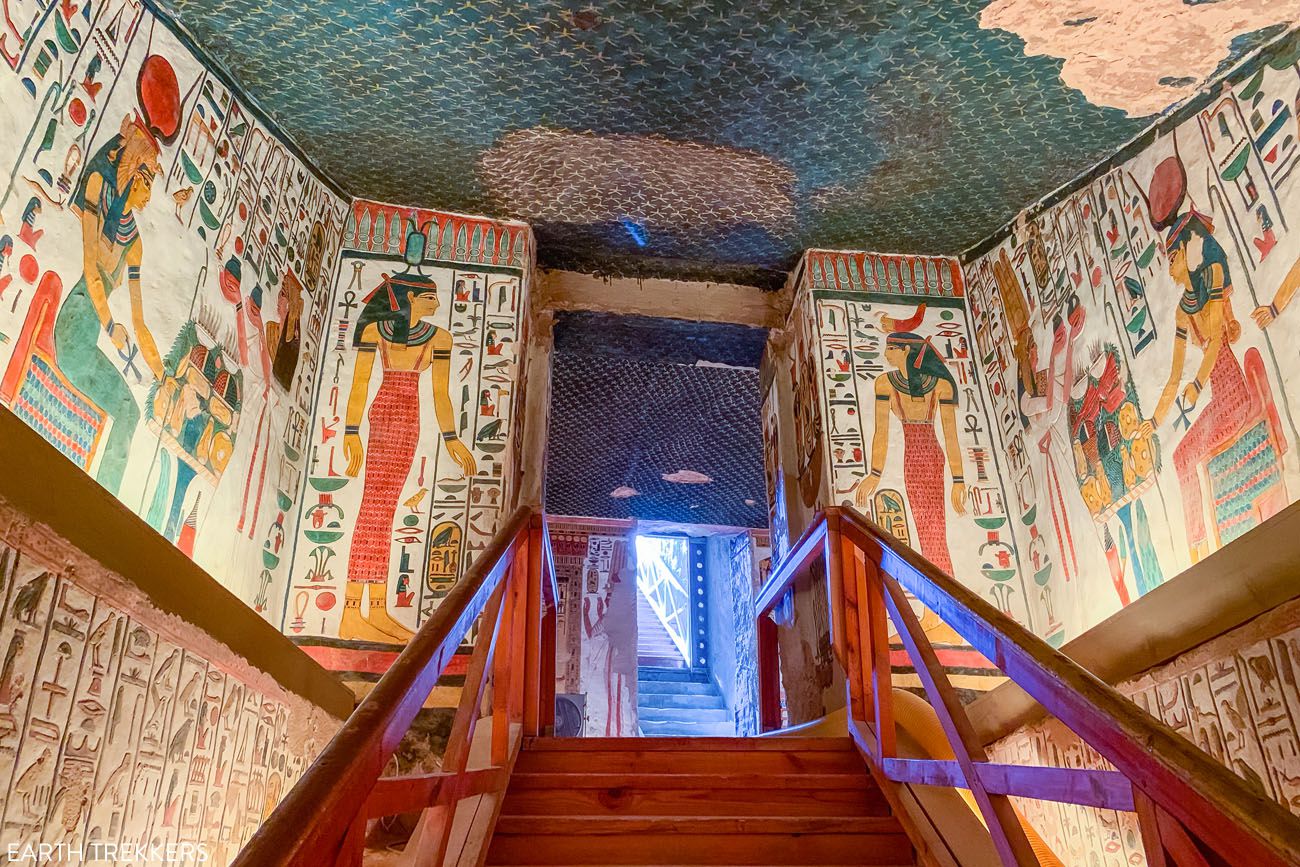 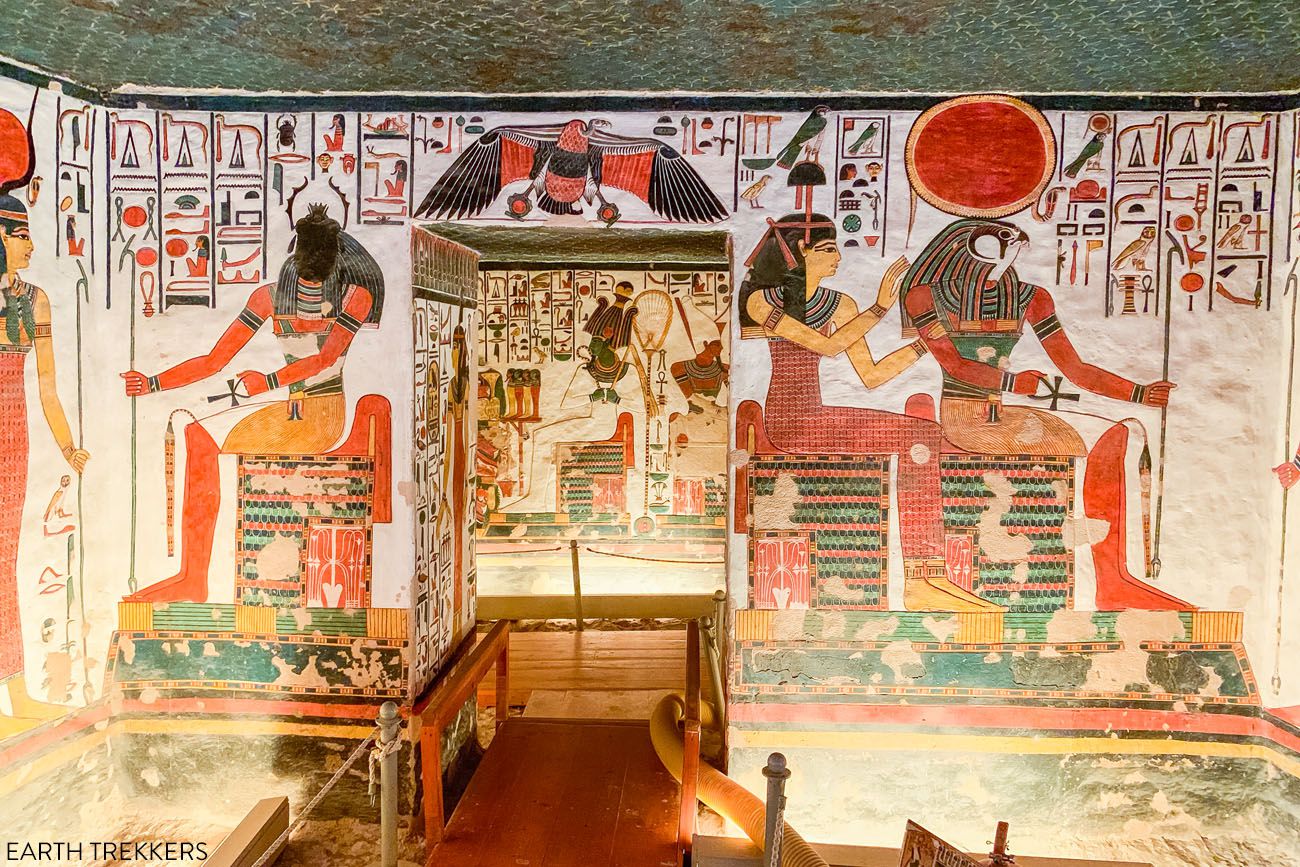 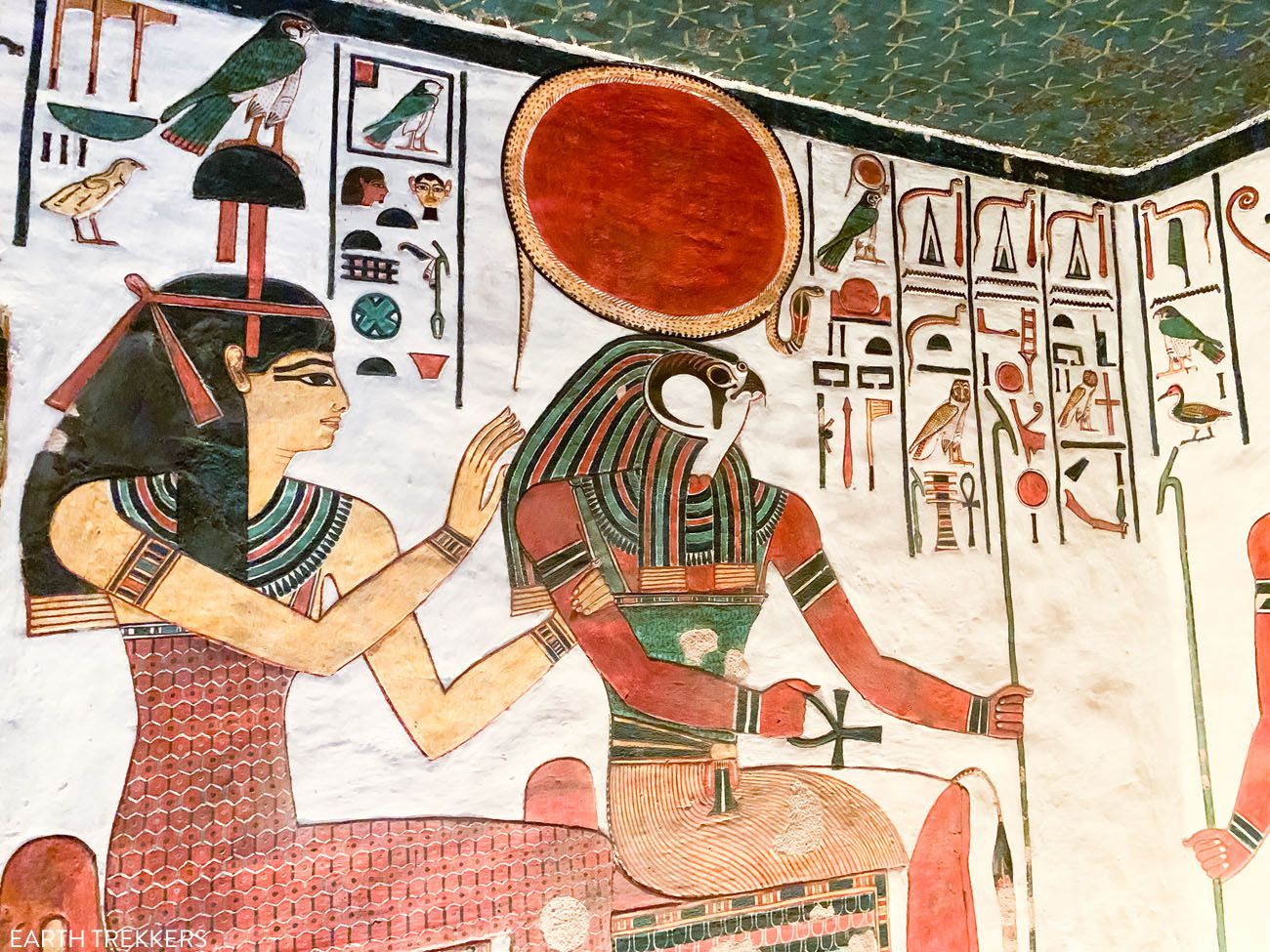 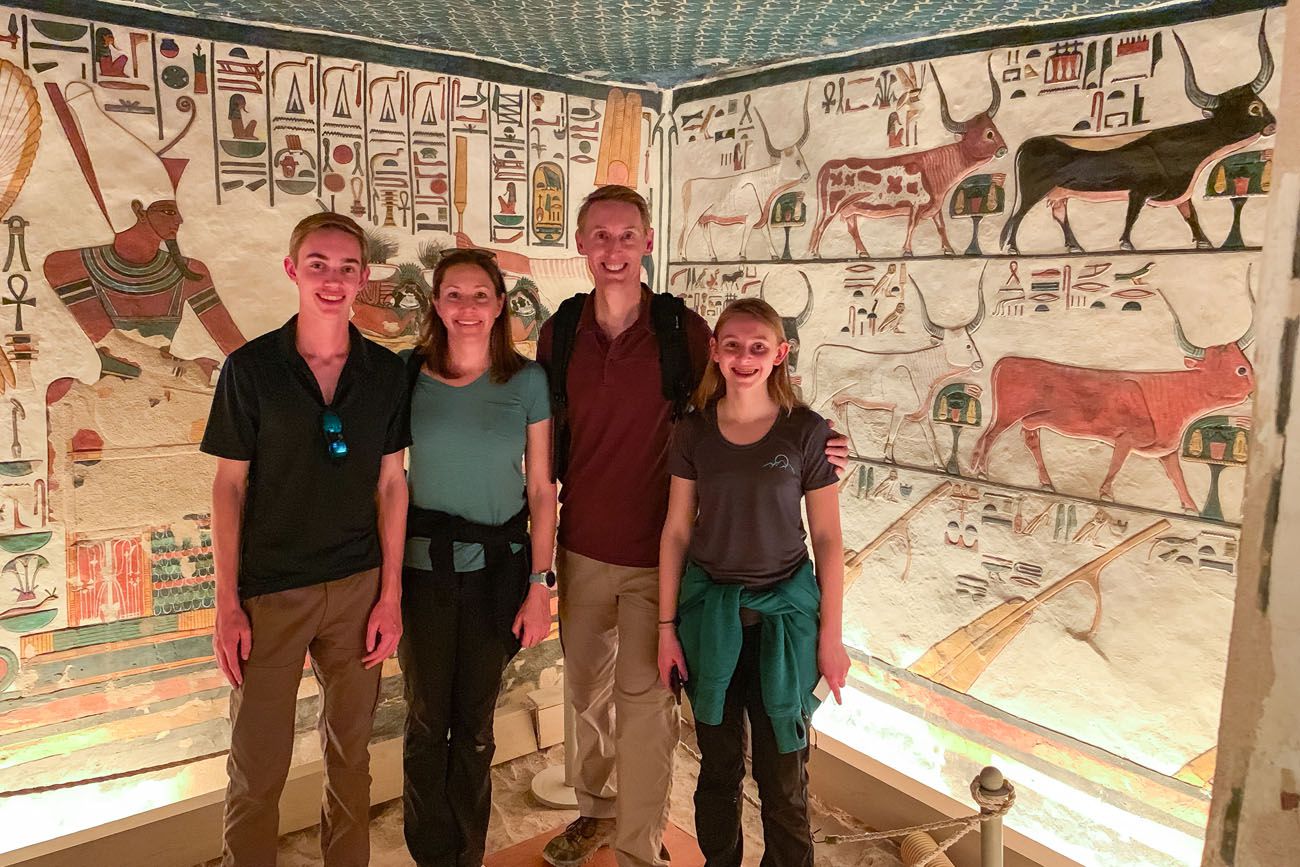 Is the Tomb of Queen Nefertari Worth It?

In our opinion, yes, the tomb of Queen Nefertari is worth the big expense. It is the most beautiful tomb that we saw in Egypt, with its vibrant colors and detailed artwork.

We also went inside the tombs of Seti I and Ramesses V and VI in the Valley of the Kings. These are also very colorful, exquisitely detailed tombs that require an additional fee. However, the tomb of Queen Nefertari was our favorite, by far, and we highly recommend a visit here.

If you are traveling with kids, depending on their age, it is probably not worth paying for them to enter the tomb. There was no discount for kids, so we paid full price for Tyler and Kara. However, they are older (they were 15 and 16 during our visit), old enough to remember this for the rest of their lives.

If you travel all the way to Egypt, it is worth it to spend a little more money to see one of the most breathtaking places in this extraordinary country. 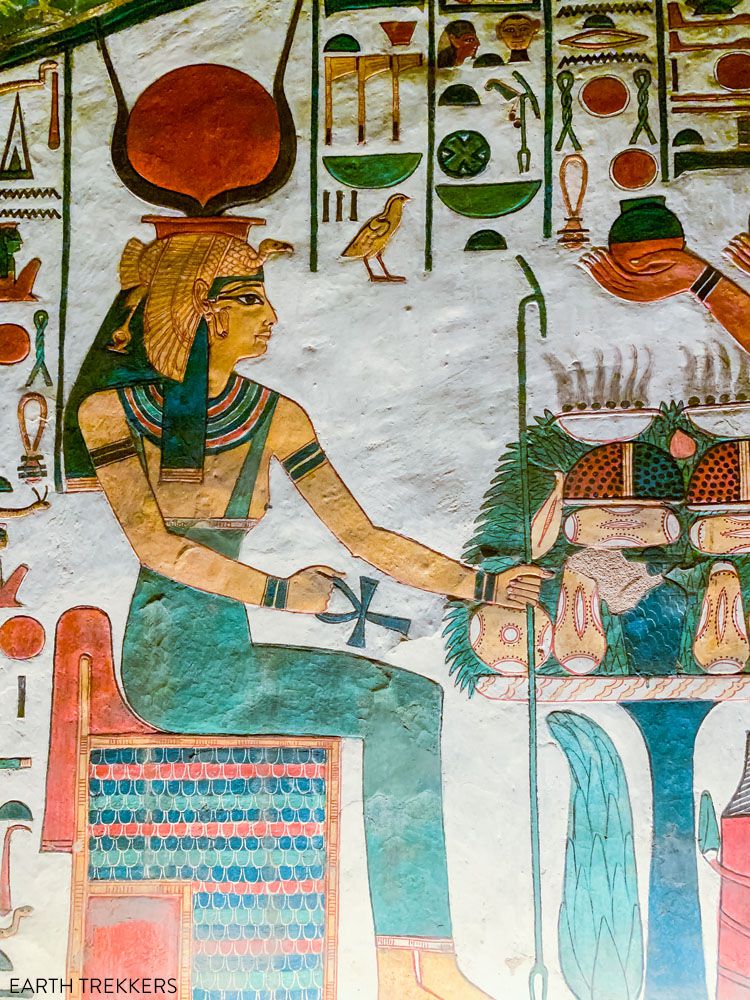 Valley of the Queens: 100 EGP
Additional Fee for the Tomb of Queen Nefertari: 1400 EGP

Pro Travel Tip: Purchase the Luxor Premium Pass for 2000 EGP. If you visit the tomb of Queen Nefertari and the tomb of Seti I in the Valley of the Kings (which costs 1000 EGP), you will already save 400 EGP. The pass is good for several days and all of your other visits in Luxor are now “free,” including Luxor Temple, Karnak Temple, and the west bank sites, of which there are many more to visit.

We toured Luxor, Egypt on a private tour with Ali, an Egyptologist, and a driver through Egypt Tailor Made.

If you have any questions about visiting the tomb of Queen Nefertari, or if you want to comment on whether or not a visit is worth it, let us know in the comment section below.

More Information for Your Trip to Egypt: 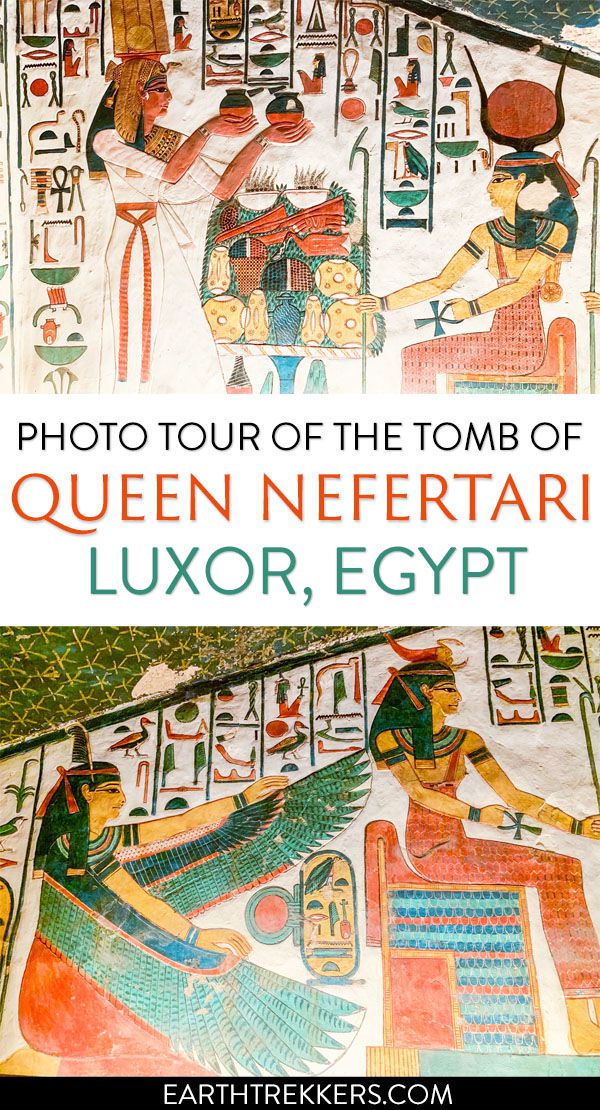 Driving Between Aswan and Luxor: How to Visit Kom Ombo, Edfu...