BEIJING, Oct. 22, 2021 /PRNewswire/ — A news report by chinadaily.com.cn on an international media tour in Tianjin:

The third leg of the “A Date with China” international media tour kicked off in Tianjin on Friday. 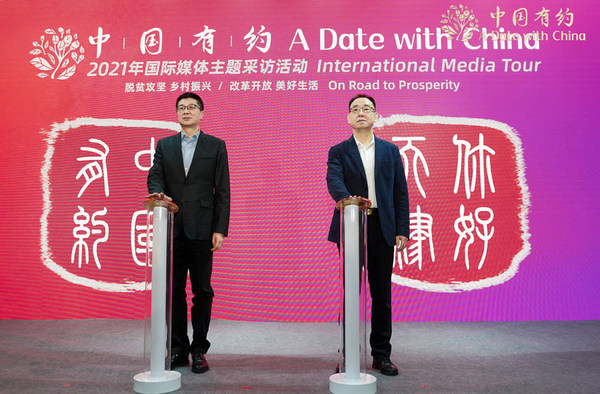 Niu Yibing (left), deputy minister of the Cyberspace Administration of China, and Zhou Derui, member of the CPC Tianjin Standing Committee, press buttons to start the third leg of the ‘A Date with China’ tour during the launch ceremony in Tianjin Friday. [Photo/chinadaily.com.cn]

The third leg of the tour was jointly launched by Niu Yibing, deputy minister of the Cyberspace Administration of China, and Zhou Derui, member of the CPC’s Tianjin Standing Committee and head of the Publicity Department of the CPC Tianjin Municipal Committee, at the launch ceremony.

Zhang Yong, deputy director of the Cyberspace Administration of China’s news and communications bureau, said he hoped participants tell the governance stories of the Communist Party of China, the Chinese people’s stories striving for their dreams, and the country’s stories in pursuit of peaceful development.

“We should present a true, multi-dimensional and panoramic view of China, just like Edgar Snow did in his classic Red Star Over China,” Zhang said.

Wang Yun, director of the Cyberspace Administration of Tianjin, shared more about Tianjin. As the biggest port in northern China, Tianjin is an important window of China to the world. She invited participants to hear the “sounds” of Tianjin with its various Chinese folk art forms, like cross-talk and drums. “The city is full of the atmosphere of life,” she said.

Wang Hao, deputy editor-in-chief of China Daily, said China’s reform and opening-up have benefited its people and people worldwide, during the country’s accelerated steps onto the world stage. China has new changes and new stories every day, Wang added.

China Daily journalist Erik Nilsson, who is from the United States, said he is always happy to return to Tianjin, which he has visited many times. “And even though the location is the same, I return to a different Tianjin each time, because the city has continued developing so quickly.”

A series of Chinese culture documentaries titled Let’s Go to China was also released at the launch ceremony.

The documentaries are divided into six themed chapters: porcelain, paper-making and calligraphy, traditional Chinese medicine, silk and clothing design, animation and games, and red tourism. It will be broadcast simultaneously on the China Daily website, app, and social media accounts at home and abroad starting Oct 25, and will also be put on Aiqiyi, Tencent, and Bilibili in November.

Beginning in April this year, the first two legs of the “A Date with China” tour covered more than 100 interview sites in Shaanxi, Hubei, Guizhou, Guangxi, Xinjiang and Fujian, which generated thousands of reports on different platforms receiving more than 900 million views.

New Look of the Ancient Trail: promotional video of the South...